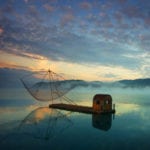 I first performed divination on the state of the country, and I have acquired Shandi Bo, which is Gua 23 in Yijing. The changed line was Yao 6. Shandi Bo is formed by upper Gua Gen and lower Gua Kun. The six lines comprise a Yang line on top, followed by five Yin lines, a sign that Yang is overpowered by Yin.

Bo(1) in Chinese means peeling off, end, rotten, etc. As it is formed by gen Mountain on top and kun Earth below, it appears that the mountain is sitting on earth, however, Yijing explains that the mountain is merely “attached” to earth, which means that the mountain is moveable, and, hence, suggests instability. For a country, the sign says that her luck is bad. For the six lines, the only Yang line represents gentlemen and the five Yin lines represent mean people, it means that the righteous is being overwhelmed by villains, creating chaos. The solution to it is on how to protect the only Yang element here. The sign says that the current situation could maintain for a year before it gets better.

Interestingly, the changed line number 6 would turn the Gua into Kun, an all Yin line sign (related to the Presidential election next year?).

Although the sign answers the issue raised, it is formed by “mountains attached onto Earth” which may also suggest that “mountains would shake”, indicating natural disasters, I followed up with another divination on it.

I asked, for the second divination, would there be any natural calamity for Taiwan in the Xin Mao year, and I have acquired Gua 25, Tianlei Wuwang, with the second line changing.

Tianlei Wu(2)wang(4) is formed by upper Gua qian, which represents heaven/sky, and lower Gua zhen, which means thunder/tremor. The entire Gua certainly appears to suggest earthquakes, but the specific second line means auspiciousness. Wuwang in Chinese originally means sincerity, therefore, as long as the people could sincerely repent and do right, which is the Heaven’s way, there shall be no real natural disasters in the year.